In a time I once thought of as my own, now centuries distant in different future, I knew too much, asked too much and talked too much. So I was sentenced to this kind of death. They shaved my head and tattooed the Papal mark on my skull. For my protection. 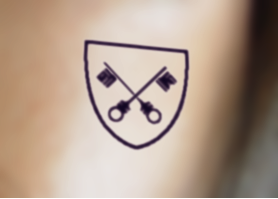 Then they sent me back to this "now". It could have been Siberia, though I know it is not, just mankind's past. My universe, my origin, my mind's present tense is forever lost to me among universes without end. I was silenced.

The Bavarian villagers found me in the morning, naked and unconscious is their village square. They saw the Papal mark on my shaven head. It had significance to them, so they did me no harm. They brought me clothes, and when I regained my bearings, I was given dark bread to eat and cool water from the village well. What they talked of, those first few hours and days, I don't know, but I didn't see anger or fear, just wonder. I stayed mute, offering no explanation for my presence.

These people are tenant farmers, what else is there? It didn't take much to figure out how to do their kind of work. Though my hands were soft and my muscles unused to long physical exertion, I joined the men in the fields. There was no need for speech. No one chased me away. I watched and learned. With time my body hardened. My hair grew back to cover the tattoo.

No one here could read or write except the village priest. Crafts were taught from father to son, mother to daughter. Marauding mercenaries taught them the law of the sword. The clergy taught them acceptance. In this dark age, time stood still while generations toiled endlessly.

Having slept in hay-lofts and attics the first year, I took to building a cabin of my own. I was careful to copy precisely the construction and style used in the village. Some came to help lay the foundation and move the beams into place. Others showed me how to mix clay and straw for walls. They understood then that I was staying. I was not to be struck by lightning or fetched away to Rome in some golden chariot. Though I now understood their language, still I did not open my mouth to speak, fearing where it might lead. They feared God and the Devil. I knew they would act on that fear.

I was a prisoner of time, confined to this universe. Sometimes I would picture in my mind a less subtle cage than this, where I could cry out in rage at my shackles, where there would be a steel door to pummel, damp walls where I could scratch the passing days of my incarceration, counting the years, holding on, hoping for mercy to set me free. For me there was no such cage, no door, no hope of release from this anguish. My loneliness was absolute. A great man might have found some inner strength in this situation, I did not. I missed the pleasure of fine meals, I missed friends and conversation, music, literature, travelling the world, the challenges of research and making my mark. My former life had been obliterated, this new one offered nothing to sustain me. The fear, the cold, the dirt, the diseases and the mind-numbing, tedious, back-breaking work wore me down. Living in this age I had to acquiesce to cruelty and superstitions, accept the needless deaths of even the very young, suffer a world where greed and stupidity ruled. In this darkness you came to me.

That day the elders bade me come to the square. The village priest, the man they called Father, was among them. You were there, just a young girl. The Priest made a sign that I should kneel on the bare ground before him, and you kneeled beside me. I was being given a wife. "A man without a wife is a threat to village serenity and God's law," said the robed man. Well, he should know. I was so filled with my own pain and grief, I hardly saw you, my love.

I wasn't prepared for companionship, even less for intimacy. I feared you were sent to spy on me, I feared your uncleanness, I feared everything that made you one of them. I would not let you cook my food or sleep in my bed. I guess I was not the man you had been raised to expect. We lived in silence. Yet you stayed. Coming home from the fields I found a log fire burning, water in my basin, and you, at work turning my house into a home. You spent time studying me those first months. You saw me cooking, eating, washing, cleaning. You studied my habits, surreptitiously learning my ways.

One evening you heard me humming softly. A tune from a different universe. I guess I had been breaking my silence quite a few times lately without realising it. You raised a finger and put it to your lips, then, as I paid you no heed, you placed that finger on my lips and laid a hand on my chest. It was the first time you ever touched me. You touched me. In the sudden silence I heard a second gust of wind rattle the window boards. You relaxed and smiled, realizing your mistake. No one had been outside after all. Yet, you had feared it. My thoughts whirled, my mind was in a state of utter confusion by your touch, your smile and the implicaions of your act. By your warning you had showed me that you realised there was danger, that you were prepared to guard my secret, making it your own.

The ceremony in the square had meant nothing to me. I had been incapable of receiving what I was given. Now everything was transformed. Trust grew from this, and from trust, love.

She grew from a girl to a woman in the years we shared. If she had been another man's wife she would have been a mother many times over - or died giving birth, as did many young wives of this age. I could not give her a child by the process available to us.

We placed our hearts and lives in each others hands. Thinking of my safety she taught me many village customs I hadn't noticed, like signs of greeting, rites for special days, and the absurd practice of wife beating. Soon I could make slapping sounds in a most convincing way and she would scream fit to wake the dead. In return I taught her nothing. The fear I had held for my own safety, I now transferred, fearing for hers. She did not enjoy the protection of the Papal tattoo as I did. The less she knew, the less likely she was to make mistakes that could attract attention and cause suspicion. Knowledge is dangerous where it doesn't belong. When knowledge spreads, power shifts, threatening those that demand our subservience. I was not likely to forget that lesson. She should know of nothing from outside her time and the narrow perspective of village life. Only by submitting to these self-imposed restrictions could I protect her from the witch hunters.

It did no good. She become used to picking up cues from me - I washed my hands, she washed her hands, I tended to cuts and covered them with clean cloth, she did the same. She must have seen how I poured cold water on a small burn, cooling the smarting spot, preventing a blister from forming. She did the same. I was in the fields when she had her accident. She tripped as she carried a kettle of hot lard. The scolding liquid splashed her breast and arms. Naturally she cried out. Then, in pain, she ran to the village well. Once there she grabbed a bucket of cool water and proceeded to pour its content over herself. It all happened in full public view. She did not remove her clothing, but sagging cloth and ripped buttons served to expose her breasts to the gawking crowd.

They locked her in a cellar. At first the talk was of her behaviour. A lashing would have been the likely outcome. But as the days passed and her skin refused to blister, turning only bright red despite the scolding she had suffered, the mood of the villagers changed, turning sinister. "Witchcraft!" The word was out, and once it was out there was no turning back. Healing was the prerogative of God. This woman knew too much of healing. "Witchcraft! Witchcraft!" When asked where you had learned such trickery, you remained silent. Maybe you thought you loved a devil, yet you did not speak my name. They took you. The flames took you. I see you still. I am humming tunelessly with no one caring, they think me mad. Silence is only then enough when even the mind grows silent. I am shaving my scalp now, exposing the sacred sign once more. Then I leave. Beyond the village lies another universe.

Tilbake til hovedsiden / Back to main page.